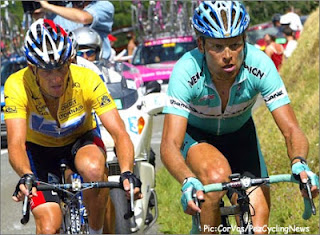 Over the course of Lance Armstrong's Tour de France victories his chief rival was Jan Ulrich.  Lance and Jan were opposites in many ways - one of which was their cadence.

Ulrich typically pedalled at a cadence of 80 rpm whereas Armstrong pedalled at 95+ cadence - even when on long, steep climbs.

Surely 'pushing' a hard gear would generate more power than spinning in a lighter gear ?

Let's look at some physics.

Work is the effort (Force) to cover a particular Distance.  In other words


Now a third concept - Velocity.  This is more commonly called speed and is what all athletes are seeking but within a speeding bike there are two other speed variables - the cranks (cadence) and the wheels (Rotational Mass (which is a whole different discussion on why wheel weight isnt the most important factor in wheel speed))

If we plug THIS back into our formula we get


Force is limited by the fatigue factor of the fibres.  As we progress to using more Type 1 fibres our rate of fatigue increases.  But if we use the same force and increase our cadence then our wattage goes up.


Think about your car.  When you want to accelerate to over take a car do you drop down a gear and increase RPM or go to a harder gear ?


If you look at the Tour Riders you will note they actually run very easy gears with guys like Contador running a 27 tooth cog on the rear.  This allows him to maintain a higher cadence when climbing.


A second consideration is run cadence (not an issue for Ulrich..)  Typically good runners use a cadence for around 188 steps per minute which is equivalent of a 'cadence' of 94.  By using a higher cadence on the bike more closely matched to run cadence a triathlete is better able to maintain a natural body rhythm .